The most powerful isomorphic MIDI keyboard —

For Apple iPhone and iPad

Musix Pro is a unique instrument where you can learn every major and minor chord in two minutes! The hexagon note layout allows songwriters to discover new melodies and musical relations. Novices find the note layout easy to learn and play. Musix Pro even offers MIDI and OSC support for your favourite programs. 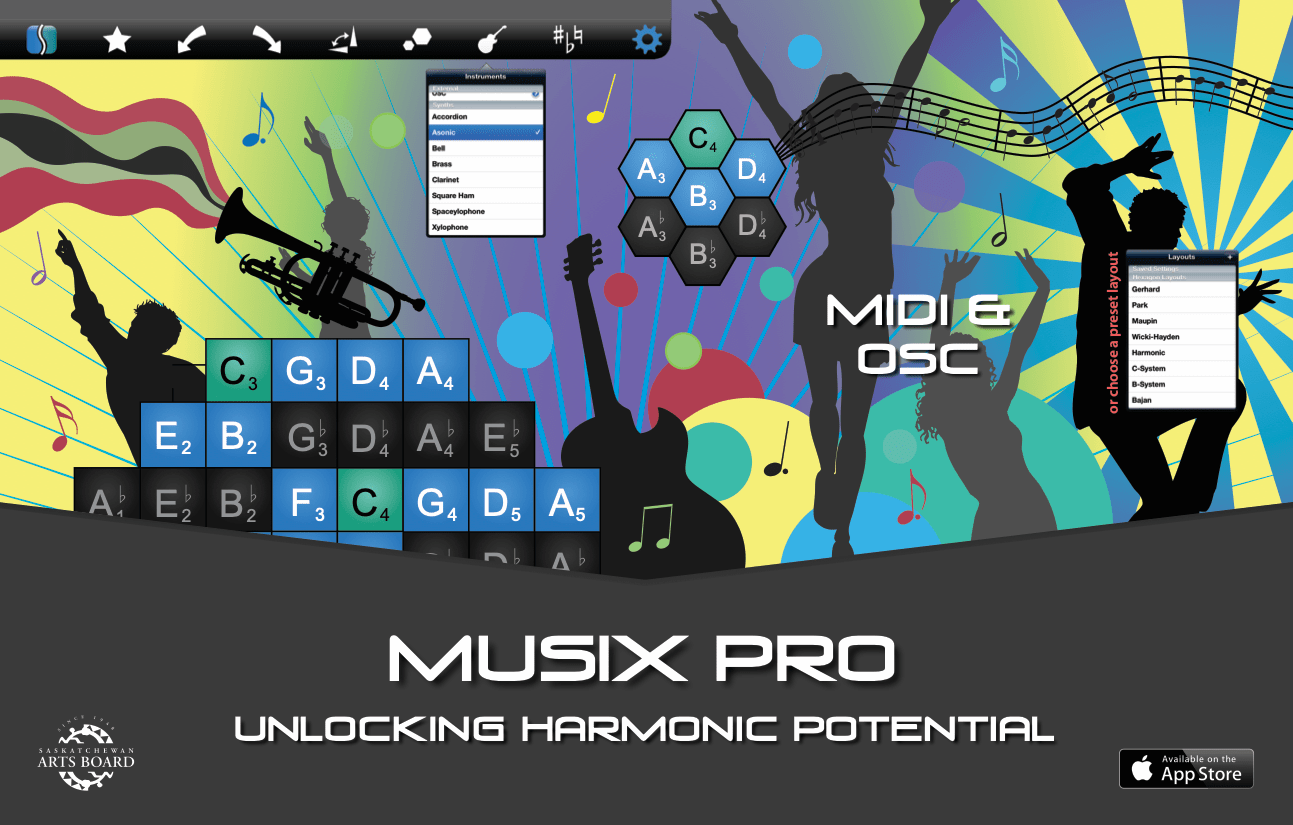 What is Musix Pro? 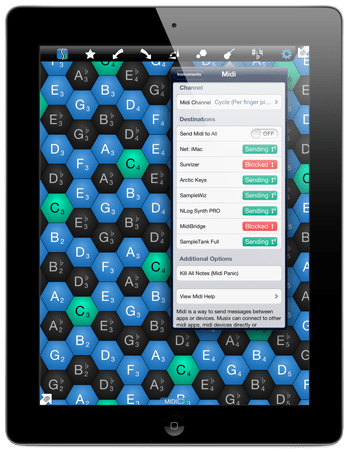 Works as a controller for:

Please note: You cannot record audio, add effects, or do looping in Musix Pro. That is why Audiobus exists!

If your having issues with Musix Pro, Audiobus, and MIDI (or other issues) check the versions page for known bugs.

Musix Pro is "key agnostic", which means is that once you have learned a musical pattern (like a chord or a scale), that pattern is the same for all keys, even the dreaded C-flat! Sharps and flats appear in the right place automatically, through the mathematical magic of isomorphism. You can learn to play melodies on a traditional keyboard by playing them on Musix Pro and watching where the sharps and flats go.

Songwriters can use Musix Pro to discover new melodies and musical relationships. Novices find Musix Pro easy to learn to play. Experienced musicians enjoy the an intuitive but powerful interface. Keys can be resized to fit your style or ability - try starting with "epic"-sized keys, and as you get better you can shrink the keys to fill the screen with notes.

Isomorphic keyboards are found on both traditional and new musical instruments, from concertinas, accordions, and "jammers" to Janko keyboards, harmonic-table devices, and more. Musix Pro is the only way to access all isomorphic note arrangements in one powerful customizable application. Want to try a custom note arrangement of your own? Musix Pro can help you build and play any note arrangement you like!

Musix Pro comes with a set of built-in layouts, each with its own pros and cons. The harmonic table layout allows you to play any major chord by touching three hexes with one finger. The Wicki-Hayden layout makes modulating between pentatonic scales a breeze. Try them all and find one that works for you.

Musix Pro comes bundled with a set of pre-fab layouts which includes several of the more popular isomorphic layouts as well as two we designed as part of the development of the app. In addition, we are including more layouts at no extra cost, but we are not providing detailed pattern sets for those keyboards. Each layout has its strengths and weaknesses, and we encourage you to try them all and find one that works for you.

Included Layouts and Their Definitions 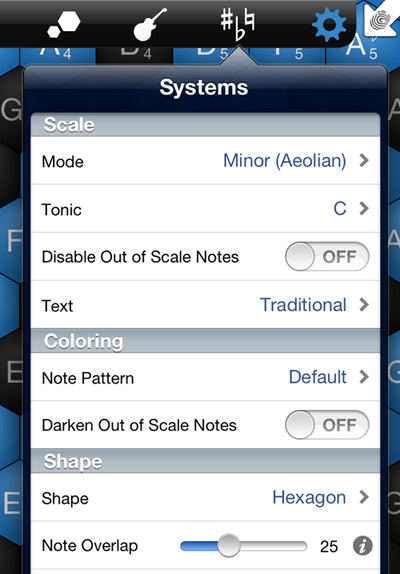 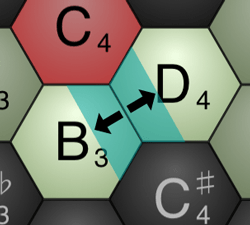 
Each sound is created from scratch using FM-Synthesis or Wave-Synthesis. This allows the creation of complex harmonic spectra, or in other words, full and rich sound.

Musix Pro has built in Core / Virtual Midi support which allows you to use the synthesizers and audio software you already own to make great music wirelessly with the Musix Pro interface. This can be done between apps or between an iPad and a computer wirelessly. If you really want to grab all the advanced information about note press location you can OSC. For more details see below:

How-to: Roll Your Own Isomorphic Layout

To roll your own layout, choose an interval for each direction (South-east and South-west) and a choose whether to use Horizontal or Vertical Layout.

You can also choose the note size:

All hexagonal layouts are defined by the intervals in each of the six directions. For a layout to be isomorphic (making patterns the same in all keys), an interval in one direction must be the same for each note, meaning that regardless of where you start, going south-east will always be, say, a major fifth, and therefore going the opposite direction (north-west) will always be the opposite interval (a descending major fifth, in this case) 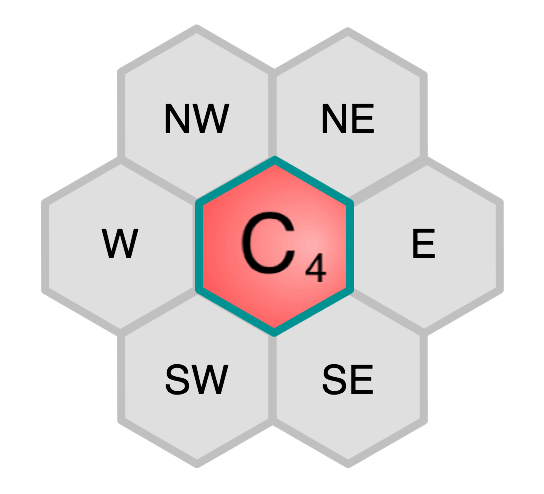 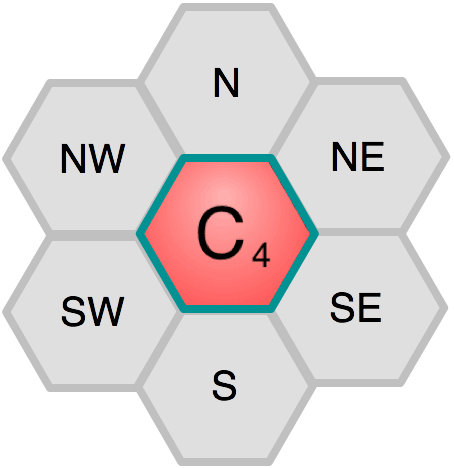 So while it looks like you can define six intervals (one for each direction), three of the directions are constrained to be the opposite interval of the opposing direction, and thus can't be defined. But if you look a little deeper, you can only define two intervals.

If you go south-east, and then south-west, and then north, you end up back at the same note, making those three notes a triangle. If you know two of those intervals, the third must take you back to the original note for the keyboard to stay isomorphic. So really, all you need to do is choose two intervals to define the layout. The third is the sum of the other two, in the opposing direction. 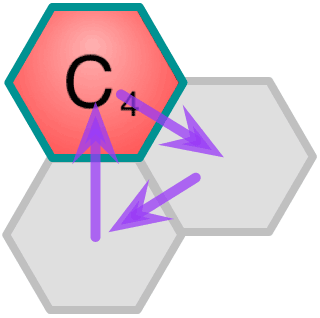 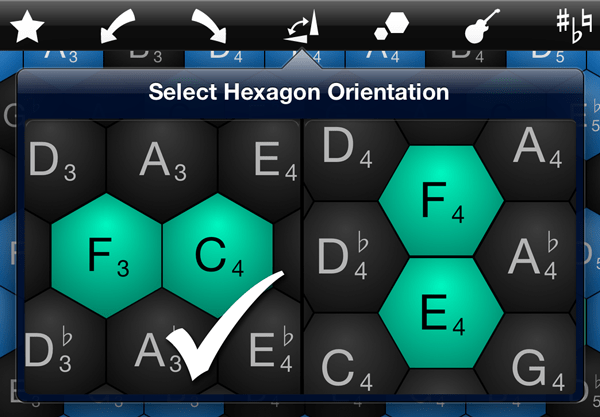 The most powerful isomorphic MIDI keyboard —

For Apple iPhone and iPad